Wielded with a Pilot pen, Liam McKinnon draws the imagined characters in his mind to life. 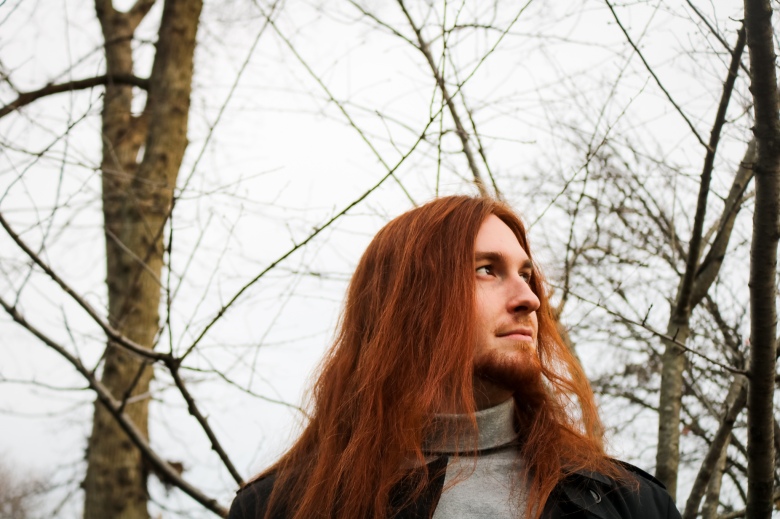 What medium do you usually stick to?

Pretty much pen portraits. Sometimes I use pastels, but I haven’t used charcoal in a very long time. I use Pilot pens, mostly just because they’re cheap. You could get a pack of them at Walgreens for like $2. I can get very graphic with them. Pilot pens also don’t smudge, so I can start anywhere. They don’t get darker or lighter, so the dots and lines look very uniform.

What compels you to do art?

I find the human form very interesting. More specifically I like how faces can look very similar, but they’ll always be slightly different. I get really drawn to people who have unique looks, or their face is uniquely shaped.

I have in my mind eight different groupings of how people look based on the bridge of their nose and their eyes. A lot of people’s facial structures don’t vary that much, so when I see someone who’s different I immediately want to draw them because it’s something I haven’t drawn yet.

Was there ever a time in your life when you felt an emotion and you just had to draw?

I generally don’t use my emotions to draw because then it doesn’t end up looking good. When I’m drawing while sad it just ends up looking sloppy. Once when I was mad–frustrated over detail work– I took a Sharpie and attacked the page.

Did you still draw at the hardest point in your life?

I actually didn’t draw for two months during that period. It was a really hard break up with someone who I had been seeing for almost three years. Even though it wasn’t really my fault, I’m the type of person who blames myself for a lot of stuff.

I had no motivation to do anything. School sucked, I was still living with my parents, but then I moved out in 2017 with my best friend since seventh grade, and we’re still living together. I’ve been better overall. I lost sixty pounds. But I can honestly say that I’d never want to go back.

How long did it take to draw “Smoke Break?”

Who is the man in “Smoke Break?”

I have no idea. The only thing I referenced was a picture for his face, which was cut off by a hat. I made him look a little different in terms of hair and facial structure, and then I gave him a cigarette. Everything else I randomly created. I didn’t know how I wanted to do it, so I drew random pieces here and there and hoped it would work out.

How did you learn to draw?

Obviously I’ve had some instruction, but most of what I learned in class was more or less refining what I had already taught myself. I didn’t have someone show me any technique.

Do you draw real people or make up your characters?

I do a lot of commission work, either by word of mouth or social media, so I usually just draw what they ask. A pizza man saw the art in my room and paid me to draw him a picture of Kanye West.

Why draw if you’re a video game design major?

I’ve been drawing most of my life because my parents always encouraged it. My mom’s an artist and my dad’s a science teacher. My mom would try to get me to draw everyday.

I didn’t get serious about [art] until my sophomore year of high school, when I really started pushing myself. I don’t think I benefited a whole lot from any of my classes except AP Art, because I had a really good teacher.

A lot of it was just drawing on my own because I wanted to. I would go on binges when I was younger and draw a bunch of one thing. [Art] was just a hobby that transformed into something that pays my rent now.

What do you hope for your career?

Ideally, in the next two years I’m going to be a tattoo artist. I get a lot of comments like ‘I want this on my body,’ or ‘you should start doing tattoos.’ My style is very transferable: dots, lines and black shading.

It’s a lot easier to make money that way. Not everyone wants to pay $50 for a print to put on their wall, but a lot of people will pay $300 for a tattoo.

I would like to make art my ‘whole thing’ that I could make money off of, but if I ended up getting on some video game design team, then I would be just as fulfilled. I’m not so interested in the coding and stuff like that, but I am into the design.

“Untitled” pen and marker on paper by Liam McKinnon

Anybody here listen to emo? If you don’t, you probably will after you hear Inches From Glory. New profile and mini podcast is up, check it out at the link in bio.
You probably forgot you followed this account but guess what Artitouille is back so expect some more content about amazing St. Louis artists coming soon ✨
Hi all! I hope everyone had a wonderful holiday season. Stay tuned for upcoming content! - Monica #fortheloveofart
Who’s seen the graffiti wall downtown? . . . . . #stlouis #stlouisgram #graffiti #spraypaintart #stl #stlart #explorestlouis #art #artist #city #reflections #highcontrast #highsaturation #painting #paint
Graphic Revolution: American Prints 1960 to Now was well worth the ticket at #slam Tickets are $14 for adults, $12 for students, but free on Fridays 😉 . . . . . . #stl #stlgram #warhol #art #stlouis #stlartist #forrestpark #stlmag #rft #photography #motion #prints #color
When your crush says they like peaches. #magritte #theartofliving #painting